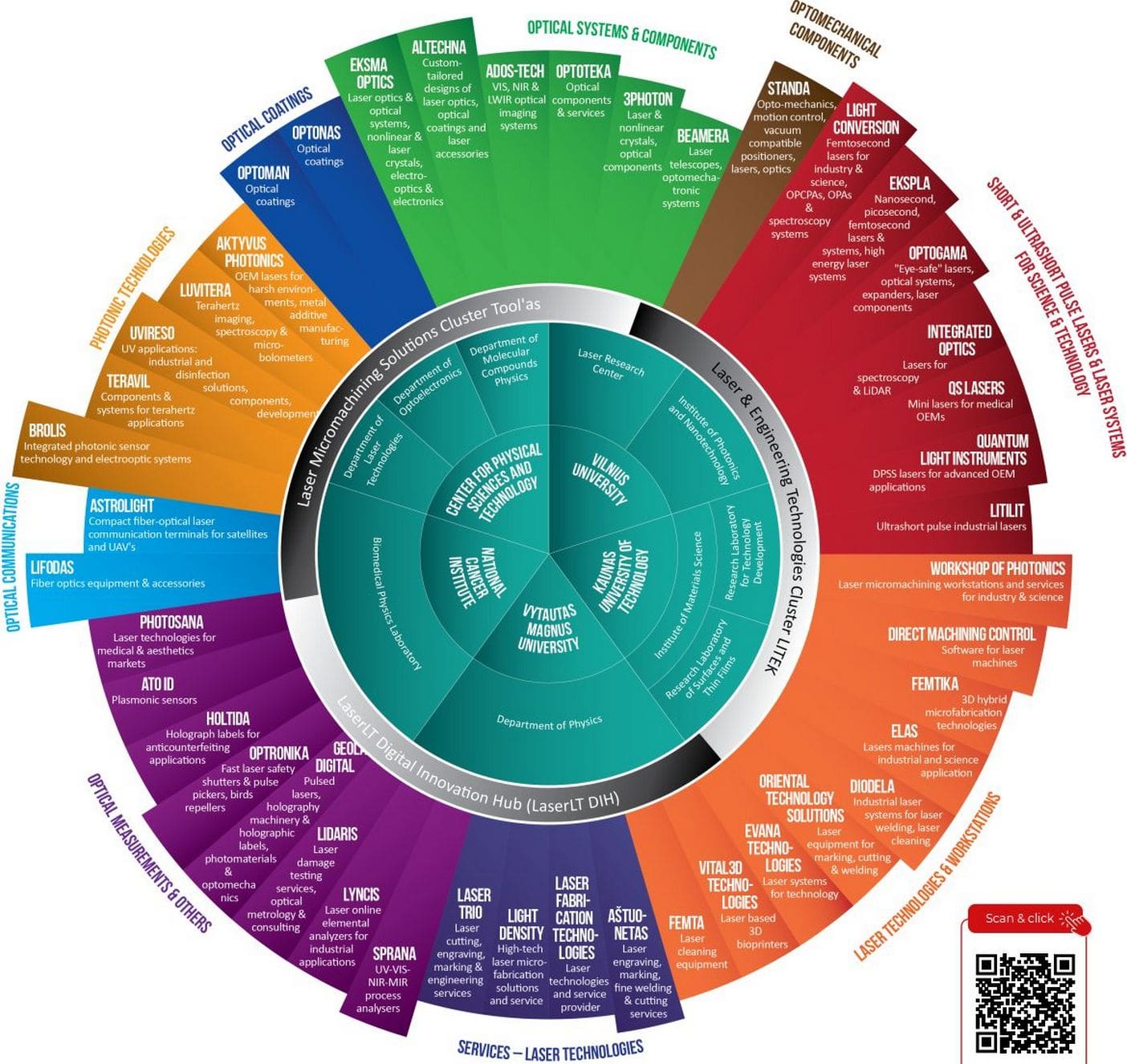 Lithuania’s young photonics industry will be represented at the LASER World of PHOTONICS 2022 by 24 exhibitors on several joint stands. A good occasion to take a closer look at this huge industry in a country with a small population of 2.8 million.

Lithuania’s photonics industry is not sensational at first glance. Around 50 mostly small and medium-sized companies. 1,300 employees, one tenth of them with a PhD. Cumulative annual sales: 176 million euros. However, these bare figures alone begin to resonate as soon as it becomes clear what else this small country with 2.8 million inhabitants is up to. Lithuania likes to call itself the land of 1,000 startups and has, in addition to photonics, a highly agile IT sector with internationally sought-after expertise in FinTech, AI, cybersecurity and e-government. In parallel, an industrial base is forming, including automotive suppliers, equipment manufacturers, and battery manufacturers. And not to be forgotten: the innovative life science sector with 85 companies. For instance, researchers from Vilnius University were instrumental in the development of CRISPR gene editing tools. And last of all, the country has the best-developed fiber-optic network in Europe.

Here, at the latest, it becomes clear that Lithuania has used the time since its declaration of independence in 1991 for comprehensive social and economic modernization. Where life sciences, battery production and fiber optic communication flourish, photonics cannot be far away. In fact, the country can build on a good five decades of photonics research. The key players can be found at Vilnius University, Kaunas University of Technology and Vytautas Magnus University, the National Cancer Research Institute, and the Center for Physical Sciences and Technology (FTMC). Vilnius University and FTMC are co-founders of the “Laser-CERN” consortium, which has formed in mid-2021 within the European Consortium for Research Infrastructures for Extreme Light Infrastructure (ERIC ELI). Not a coincidence: ERIC ELI is centered around two laser centers in the Czech Republic and Hungary, which are primarily equipped with lasers made in Lithuania. More precisely, with OPCPA (Optical Parametric Chirped Pulse Amplification) laser systems, based on research by Nobel Prize winner Prof. Gérard Mourou and laser scientists at Vilnius University.

According to Prof. Aidas Matijošius, head of the Laser Research Center at Vilnius University, this prestigious project holds great scientific potential: “Experiments with the world’s most intense short-pulse lasers in the ELI laboratories can trigger innovation on a broad front: be it in nuclear and radioactive waste management, industrial tomography, gamma radiography, or in the production of radioisotopes in pharmaceuticals, as well as the development of medical imaging and radiation and proton therapy techniques,” he lists. OPCPA technology has now outgrown its research scope in Lithuania. The two laser manufacturers LIGHT CONVERSION and EKSPLA produce and market it worldwide. The most important markets: the USA, Japan, South Korea and, of course, photonics users in the European Union.

“Our industry regards itself as part of the global value chain,” explains Laurynas Ūkanis, who, as project manager in EKSPLA’s marketing department, is closely involved in organizing the Lithuanian joint booths at LASER World of PHOTONICS from April 26-29, 2022. The joint presence, he said, has succeeded in drawing more attention to his country’s dynamic and highly innovative photonics industry in recent years. “In the beginning, when it was every company for himself at the international trade shows, we were often overlooked,” he reports.

Entire process chain on the gound

But it is now clear that a photonics industry has developed in Lithuania with players along the entire process chain. This starts with one of the largest companies, EKSMA Optics, which develops crystals, mirrors, optical components and switches and sells them in more than 50 countries worldwide. To manufacture these basic components of photonic systems, EKSMA recently commissioned a modern 7,300-square-meter plant. Component manufacturers also include 3Photon, a specialist in polishing and coating optical components, nonlinear crystals and optics, and Altechna, which for 25 years has specialized in the development and making of laser optics, polarization optics, crystals and actuators for beam expansion, attenuators, and optical mounts. LASER exhibitors Optonas, OPTOMAN and Standa  are also active in this part of the process chain. Whereby the latter also offers optical tables, positioners and many other optomechanical products. The spectrum of suppliers also includes the young DMC Direct Machining Control, which specializes in control software for a wide variety of laser processing machines.

In addition to component manufacturers, there are numerous suppliers of laser systems and modules. For example, the start-up Litilit, whose femtosecond fiber lasers are in demand in biophotonics and medical technology as well as in ceramics processing and electronics manufacturing. At its heart is a patented laser pulse generator, which Litilit says combines the reliability of telecom technology with high robustness to external interference and is also maintenance-free. Other laser beam source suppliers: Integrated Optics, which offers matchbox-sized diode lasers in more than 20 wavelengths for spectroscopy, microscopy, medical analytics or LiDAR systems, and QS Lasers, whose portfolio ranges from passively and actively Q-switched sub-nanosecond lasers with peak powers up to four megawatts to laser electronics and Raman microscopy systems.

The treasure trove of Lithuanian system integrators includes Femtica, ELAS and Workshop of Photonics. Femtica, a spin-off of the Center for Laser Research at Vilnius University founded in 2013, integrates femtosecond lasers into its “Laser Nanofactory Workstation,” which combines additive multiphoton polymerization with subtractive laser ablation and selective laser etching processes. ELAS also builds advanced micromachining equipment based on UKP lasers that can process glass, sapphire, ceramics, as well as metals and plastics. And the Workshop of Photonics team is taking advantage of Lithuanian ultrafast-know-how to develop micromachining equipment based on femtosecond lasers, too. Among other things, the company holds patents on laser cutting of glass and sapphire. In addition, their team provides prototyping and manufacturing services.

The process chain is rounded off by integrators who develop photonic sensors. These include the start-up Brolis Sensor Technology, which specializes in tiny spectrometer-on-a-chip sensors for blood analysis. Or LIDARIS, which specializes in characterizing optics with a focus on laser-induced damage threshold (LIDT), and serves this approach for ultrashort-pulse systems. Its customers include more than 140 organizations worldwide, including leading optics companies.

What unites all these companies is their clear export focus on the one hand—and their roots in the Lithuanian photonics research community on the other. Many of them are direct spin-offs from universities and colleges. Others work closely with practitioners in life science and communications sectors, and cutting-edge research domestically, thereby acquiring the skilly and know-how for their global activities. Who has now got the urge: You will meet all of the above-mentioned players in five days at the LASER World of PHOTONICS 2022.

The source of information: https://world-of-photonics.com/en/newsroom/photonics-industry-portal/technologies/lithuanias-toolmakers-of-light/